This is the Q&A for the Yard and Garden show for June 15, 2018. Yard and Garden Live is a call-in radio show I do on KUTT 99.5 FM from 10-11:30 am and it will run through August 3, 2018. It can also be found on kutt995.com for online listening. If you missed a show or just want to read through the questions, I have written them all in my blog and will continue to do so throughout the season.

1.The first caller of the show wants to know how to attract more fireflies to his yard?

A. Fireflies like moist environments. So a location of higher shade that is kept moist with dense plantings will attract them to your landscape. Also, just keeping the lawn watered will help.

2. This year has high populations of ticks found in nature. Many ticks around this area have been identified by Jim Kalisch as being the Lonestar tick. Is this species of tick increasing in population in Nebraska?

A. Lonestar tick nymphs are being found often now. They have been found in the southeast portion of Nebraska. The range for this tick has spread north over the past decade or 2 to include the southeast corner of Nebraska. Prior to this, the Lonestar tick was found further south of Nebraska. This tick is significant for health reasons because it spreads many diseases including Southern Tick Associated Rash Illness (STARI), rabbit fever and erlichiosis. It also can causes a food allergy to red meat. Because of this, it is always good to remember to use insect repellent sprays and check yourself for ticks when coming inside from outdoor activities.

3. A caller has a blue spruce that was planted from a container last spring at 3.5 feet tall. Now it is turning brown on top and the branches are getting a shepherd’s crook at the end of the branches. What is causing this and can the tree be saved?

A. This is likely a fungal disease called sirococcus shoot blight. The best time to spray the trees is in May with additional sprays every 3-4 weeks as rain occurs.  It is a little late for the spraying of this tree, but it would still be beneficial to spray the tree to reduce the spread. Using a liquid copper fungicide would be best. Next spring, spray the trees when the shoots are 1/2 to 2 inches in length. 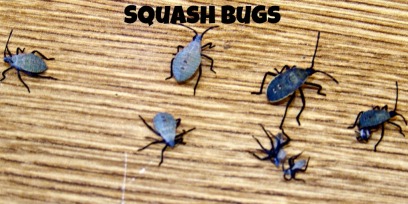 4. An email question came through asking how to get rid of pumpkin bugs in the garden this year, he faces them every year?

A. From his description, these are likely squash bugs. They are common pests in pumpkins, as well as in cucumbers, squash, zucchini, and melons. If these bugs are in pumpkins that are for ornamental use only, not for consumption, a systemic insecticide called acetamiprid can be used. Be careful if using in a garden with other edible garden plants, read the label for the PHI to tell you how long to wait from when you apply this product until you can harvest again. If these plants will be used for consumption, eight or bifenthrin would work for less PHI. Still pay attention to the PHI for harvest times.

5. This caller has oriental poppies in her garden that have faded now. They are planted in an area that is becoming overtaken by weeds. She would like to plant mums around the poppies to get a longer season of interest. How can she work the soil to plant the mums and kill the weeds, while not harming the poppies.

A. Tilling through the garden space may not be the best answer. If you till through weeds, it can sometimes cause more of a problem. Many weeds will propagate vegetatively, so new plants will form from each of the cut pieces of the main plants. Also, it would be difficult to till around poppies safely. I would recommend carefully using glyphosate on the weeds for better control, do not use any 2,4-D or Dicamba products this time of year due to problems with these chemicals turning into gas and moving to non-target plants. Spot spraying the weeds or painting the chemical on the leaves would get more of a kill for the weeds and the glyphosate product will not turn into a gas and it deactivates as it hits the soil. Finally, just go in and just dig holes where the new mums will be planted.

6. A caller wants to know when the best time is to move tiger eye sumac?

A. Fall would be fine to move this sumac, such as in September.

This caller also has a 5-year-old peach tree that has borers. How can the borers be controlled?

A. For borer control, it is best to treat the base of the tree and the branch junctions with bifenthrin. This chemical will have to be reapplied a few times through the growing season to help with the lesser peach tree borer and the peach tree borer which emerge at different times of the year. Applications should be made in June and again in July and August for best control.

7. This caller has a 2-year-old black raspberry. The new growth is curling and turning black, it seems to be moving from the tip of the leaf inward. What would cause this?

A. This could be from a scorch issue. Make sure that the plants are getting enough water, but check before just watering more. Often when we get scorch we automatically go to overwatering which can also be quite detrimental to the plant. For more information on scorch and how to deal with it, visit the Gro Big Red Blog Post on Scorch from Kathleen Cue.

A. The bottom branches of this tree could be just dying from shade or from a needle drop issue. That branch or 2 can be removed and the tree should be fine. It would be best to water this tree. Put the sprinkler in the root zone of this tree weekly for an hour or so to help it. As for the smaller tree, it is not going to make it. The lower portion is quite bare and it will be very difficult for the tree to come back from that.

9. What do you do about sandburs in a lawn?

A. Crabgrass preemergent herbicides should be used earlier in the season to control sandburs before they grow. Sandburs are a summer annual weed just like crabgrass. For post-emergent control, quinclorac products will work best. If it is in a driveway or other non-plant area, roundup 365 might be fairly effective.

A. New research is showing the timing for pruning has changed from what was previously recommended. We now recommend pruning in the late spring to early summer, so that would be right now for both the birch and the pear tree. It is better to wait until a little later in the spring to prune birch trees to avoid problems with heavy sap flow. The concern with this is that it was stated that a large limb needed to be removed, which can be quite harmful to the tree. Don’t remove a limb that is more than 1/2 the diameter of the trunk and do not remove more than 1/4 of the tree in one growing season. Removing a large limb leaves a large wound that the tree is not able to seal up. If the wound doesn’t get sealed, then decay can begin to move through the tree which can lead to the death of the tree in many years. In addition, removing more than 1/4 of the canopy in one season will remove a great deal of the photosynthetic area from the tree, which can harm the growth and development of the tree. The mock orange bush should be pruned within a few weeks after blooming for the year because it is a spring blooming shrub.

11. The last caller of the day wanted to know about pruning tomatoes and how to do it?

A. Tomatoes can be pruned if desired, but it is not necessary. If desired, only prune on indeterminate tomatoes, avoid pruning determinate tomatoes. Determinate tomatoes already will only grow to a certain size and produce a certain amount of tomatoes so they do not need to be pruned. Pruning tomatoes can decrease the amount of tomatoes produced and increase the size of the tomatoes and it can help increase air flow to reduce diseases. It will also help keep your tomatoes off the ground. When the plants are young, remove some of the branches. In some locations, 2 or more leaves will start to develop from one node, remove all but one. For more information on pruning tomatoes, here is a guide from Minnesota Extension.